When It Comes To DIY, There Are Some Tools You Just Need To Have

While you can get away with doing some jobs without them, saws are an essential tool to have in the tool shed.

Let’s take a look at two different types of saws and how they compare.

Why Use A Saw For DIY?

Firstly, let’s take a look at what these two saws are. Wikipedia explains that a sabre saw is electric powered hand-held saw. It is larger than its popular counterpart, the jigsaw.

Sabre saws typically have toothed blades, which has its advantages which we’ll look at below. However, due to the sabre saw missing a couple of essential components that the jigsaw has, it has less controllability.

Let’s look at what a jigsaw saw is. Wikipedia describes a jigsaw as a power tool that uses an electric motor and a reciprocating blade. Scroll saws used to be referred to as jigsaws as well, but there is now a differentiation.

The jigsaw came about in 1946 when a man named Albert Kaufmann swapped the sewing needle on his wife’s sewing machine out for the blade of a saw.

This saw model prototype began to gain traction until it was mass produced in 1947 by Scintilla before being bought by Bosch. In 1966 a couple of adjustments were made, and by 1989 the modern jigsaw was complete.

Advantages Of Using A Sabre Saw

Let’s take a look at the benefits of using a sabre saw for DIY home projects.

Do It Yourself explains that a cordless sabre saw, in particular, is an excellent tool to have around the home.

This is because having a saw without the cord that you can carry with you around the yard is convenient.

Power cords all too often cause unnecessary complications and even injuries. Additionally, you won’t ever have to think ahead about whether there’s electricity on site or not.

Another advantage to using a cordless sabre saw is that it’s safer. This is where the injury issue comes in. When you don’t have random power cords lying about on the floor, you are less prone to injury.

It also makes for a cleaner job site, too. Most power cords come in one color – black – making them hard to distinguish. If you do not have to deal with this part of the problem, your job is going to be much easier.

Disadvantages Of Using A Sabre Saw

Now that we’ve looked at the advantages of using a sabre saw let’s cover the weaknesses.

Do It Yourself continues by explaining that while the sabre saw is powerful and convenient, it does have its drawbacks.

The most significant disadvantage here is the fact that it is battery run. The type of battery you typically get with a cordless sabre saw doesn’t last for very long, which means that you have to charge it while you’re working continually.

When people use a cordless sabre saw, many of them charge it overnight to ensure that they have a full charge for the work day ahead. However, it can be hard to remember to plug your sabre saw in at the end of a long working day.

Another disadvantage to using a sabre saw is that they’re larger and bulkier than their commercial counterparts. When you’re using a battery to power your sabre saw, you’re going to end up with a more substantial power tool that takes up more space.

When using a battery powered sabre tool, it takes up more energy. Because it’s heavier than cordless models, you exert more energy when you work.

The battery attached to the bottom of the sabre saw also inhibits the primary advantage of a sabre saw – its ability to get into awkward places. The battery makes it bulky and less likely to fit.

DIY Jobs To Use A Sabre Saw For

So, what are the bes​​t DIY jobs to use a sabre saw for? Let’s take a look. 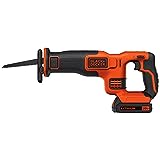 Advantages Of Using A Jigsaw

Now that we’ve looked at the sabre saw let’s discuss the advantages and disadvantages of the jigsaw.

Disadvantages Of Using A Jigsaw

Interestingly, we could only find one downside to using a jigsaw for your home DIY projects.

While Woodworking Toolkit describes the additional advantages of using a jigsaw, including versatility, they could only come up with one disadvantage that you must consider.

They believe that a jigsaw is not very accurate when it comes to DIY projects, mainly when working with wood.

They say that because they are hand-held saws, they’re not going to be as precise as sabre saws. You’ve got to account for human error when embarking on a power tool project, especially if the tool is controlled with your hand.

DIY Jobs To Use A Jigsaw For

Now that we’ve covered the advantages and disadvantages of using a jigsaw let’s get into what they’re good for around the home. 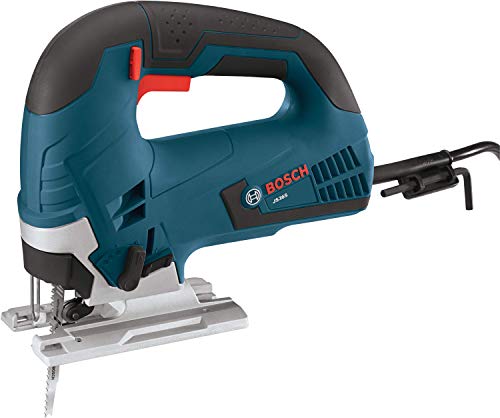 Now for the million-dollar question: which is more expensive, a sabre saw or a jigsaw?

Looking back at Wikipedia, we know that when it comes to a sabre saw, you’ve got a more straightforward product. While it might be larger than a jigsaw, there are fewer components to it.

This means that when purchasing a sabre saw you don’t have to think about multiple parts. When buying a jigsaw, however, there’s a lot more to think about – and it can quickly add up.

This is because a jigsaw comes with multiple blade options, that you’ll have to keep replacing. These include TPI blades, or blades with teeth, blade edge, thin blades, cranked blades, and push stroke cutting blades.

Another addition to the jigsaw that makes it more expensive is the use of a battery. While you can get battery powered sabre saws, they’re more popular in jigsaws.

Rather than relying on one cord that will last a lifetime, you’ll instead need to continually replace the battery pack, increasing its overall price tag.

To summarize, the sabre saw, while larger than a jigsaw, is simpler.This means that you will be able to pick up a sabre saw for less. However, ajigsaw is capable of more DIY tasks, making it versatile and worth more than asabre saw.

If your projects are heavy-duty, it’s worth paying more for a jigsaw. However, if they can be accomplished with a less powerful tool, choose a sabre saw.

We’ve learned all about the different uses of both the sabre saw and jigsaw. What, then, is the marked difference between these two DIY power tools?

Chris Baylor of The Spruce Crafts says that the jigsaw evolved from the scroll saw, which is known for being used as a tabletop tool.

While the jigsaw has a different blade system than the scroll saw, it also utilizes the tabletop to get jobs done.

The stationary jigsaw that you could carry around with you evolved into the sabre saw. This type of tool is notable for having an open blade at one end, as opposed to a down-facing tool.

As manufacturers modified the sabre saw, they placed a knob on the top to give you more control when turning the blade for intricate tasks. When it comes to handheld power tools, a sabre saw doesn’t have this knob, while a jigsaw does.

You will also find that sabre saws are often called reciprocating saws, depending on who the manufacturer is.

Owning And Using A Sabre Saw Or Jigsaw

Purchasing and owning a bladed power tool for all types of  DIY tasks is a great way to get the job done.

While the jigsaw is typically more expensive than the sabre saw, it can be worth it for the additional features.

However, if you’re not looking to embark on any heavy-duty projects in the future, you may want to opt for the cheaper option.